This Library Was Built To Look Like A Human Eye

If there’s one thing China can do it’s massive stuff quickly. The Tianjin Binhai Library on the coast of the Yellow Sea is no exception. Designed with the help of Netherlands-based architecture and urban design practice, MVRDV, the Tianjin Binhai Library is 33,700m2 with enough space for 1.2 million books. Incredibly, it was built in under three years due to a tight contract.

At its center is a luminous spherical auditorium around which floor-to-ceiling bookcases cascade. The walls undulate and flow around the orb. “The Tianjin Binhai Library interior is almost cave-like, a continuous bookshelf. Not being able to touch the building’s volume we ‘rolled’ the ball shaped auditorium demanded by the brief into the building and the building simply made space for it, as a ‘hug’ between media and knowledge” says Winy Maas, co-founder of MVRDV. “We opened the building by creating a beautiful public space inside; a new urban living room is its centre. The bookshelves are great spaces to sit and at the same time allow for access to the upper floors. The angles and curves are meant to stimulate different uses of the space, such as reading, walking, meeting and discussing. Together they form the ‘eye’ of the building: to see and be seen.” 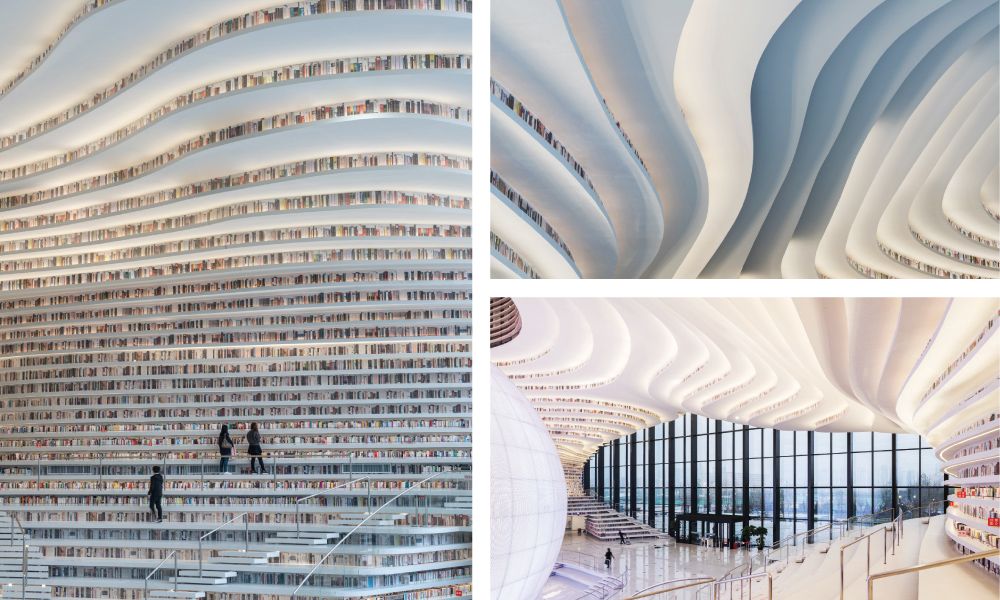